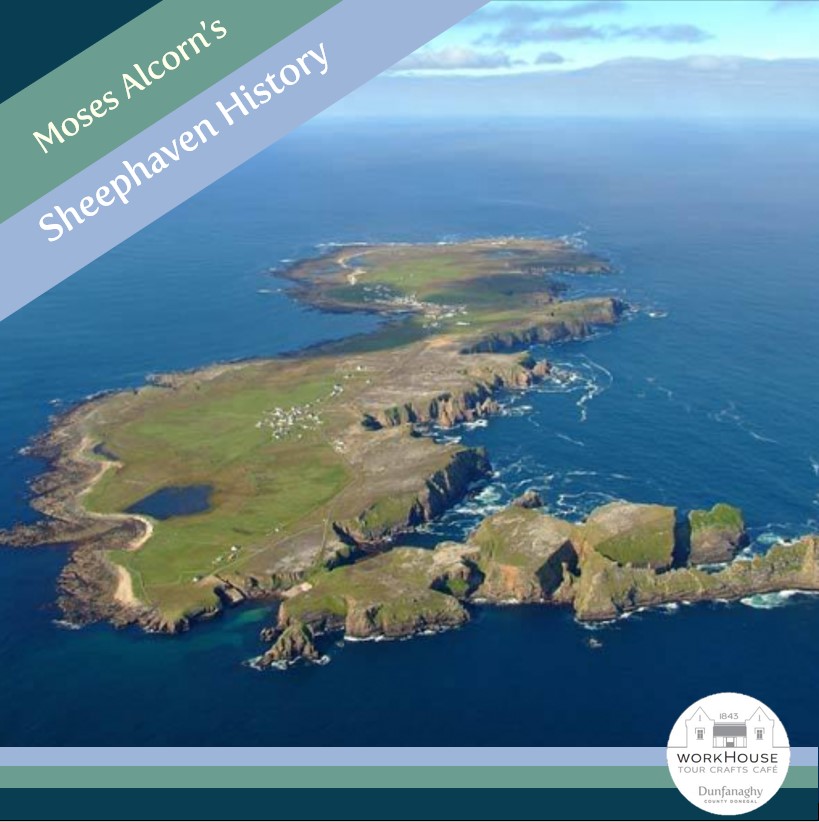 This week’s Sheephaven History looks to one of the most inconic shapes in our landscape – Tory Island. Inis Toraigh or Tory is an island located off the coast of Donegal and, while small, is steeped in history with a rich tradition of music and mythology, as well as being a bastion of Ireland’s language and culture.

For centuries, the island has stood as beacon in the Atlantic as it keeps a lookout on the continuing history of Ireland from ancient times right up to the present day. The Island has witnessed turbulent times from invasions to Wars and to Famines, and yet its people have remained steadfast against it all. The Islanders are fiercely proud of their island and its way of life, and visitors have traveled to the island in their thousands every year to immerse themselves in the language and Tory culture. Up until a few years ago, visitors were even greeted as they landed at the pier by the late King of Tory himself, Patsy Dan Rodgers. The rich tradition of Irish Kingship dates back millennium, and this made Tory one of the final places in Ireland with a King.

Battles and warfare are as part of Tory’s narrative as the waves surrounding it, with many important parts taking place in its waters in both the History and Pseudohistory of Ireland. In the Lebor Gabhála Érenn or Book of Invasions, a medieval text which accounts for the mythical origins and history of ancient Ireland, Tory was the home of the Fomorian Stronghold, the enemies of the occupants of the mainland. According to legend, the third invaders of Ireland, the Nemedians, battled the Fomorians at the Conand’s Tower on the island, Conand being a Fomorian King. The later King of the Fomorians, Balor of the Evil Eye, locked his daughter Eithlinn in a tower on the island called Tor Mór in an attempt to prevent a prophecy that his death would come from her children.

In more recent history, great battles and sieges took place around the island. In 1608, the Siege of Tory Island took place during O’Doherty’s Rebellion when surviving rebels from the rebellion made their last stand against the Crown on Tory Island. In 1798, the Battle of Tory Island (also known as the Battle of Donegal or the Battle of Lough Swilly) took place on October 12th between the French and British Squadrons during the Irish Rebellion. This was led by Wolfe Tone and the Society of United Irishmen and it was after this final Battle that Wolfe Tone was later captured by the British. In 1884, the HMS Wasp was on a mission to collect rents on the Island when it struck the rocks at Tory Lighthouse and was lost. Coincidentally, the Navy launched another HMS Wasp in 1886 but it disappeared at Sea a year later and was never heard from again. They may have wisely decided to not name another HMS Wasp after this. In 1914, on October 27th, the first British battleship of WWI was lost. This super-dreadnought ship, the HMS Audacious, was sunk off the island when it hit a minefield laid by a German merchant-cruiser. Officially, this loss was not publicisided until three days after WWI officially ended in 1918. The passengers of the RMS Olympic, the sister ship of the Titanic, witnessed and photographed its sinking. This is only one of many other ships that would have sunk around Tory in the two World Wars, and it is sus[ected that there are over three hundred wrecks in the vicinity of the island with the loss of thousands of lives.

In more recent years, the Tory Islanders have faced battles which threatened their way of life and the island’s very existence. In the 1970s, the future of Tory came under threat when the authorities tried to depopulate the island but the islanders fought the campaign to save their island. Despite the fact that half the population left the island, those who stayed oversaw great developments on the island such as the Ferry Service, New Pier and the building of a New Secondary School.  Tory has been a thriving hub of life for the past 5,000 years filled with music, stories and tradition, and today not much has changed. Tory is a thriving and close-knit community that everyone should visit and if you do, be sure to take in the stunning views, the lifestyle and maybe practice some Irish while you’re there!  https://www.toryferry.com/about