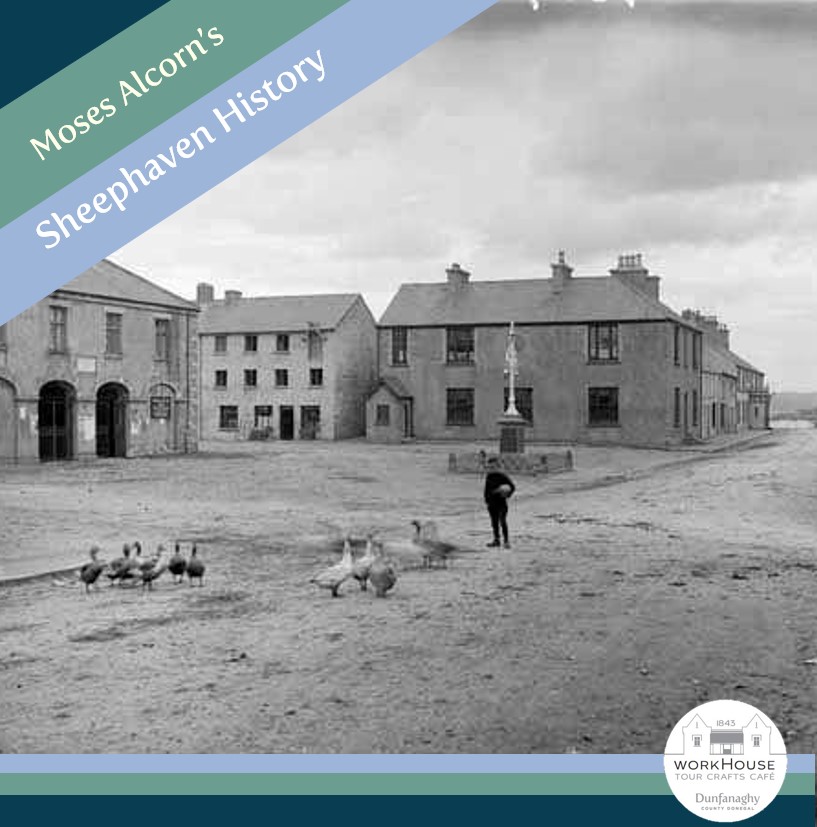 Today, the village of Dunfanaghy relies heavily on tourism for much of its business. However, in times past, Dunfanaghy was at a central point for the British Empire in the area as it held a headquarters for the Army, Coastguard, and administration, including the Union Workhouse for the catchment area. This would have meant that many more people were living in this area compared to others, with most living on the Main Street. As a result of this larger population, Dunfanaghy was also the home of many of the services which the population of the neighbouring countryside would have come to town. This included the bank, post office, the market square, etc. The farmers from the surrounding area would also come to the town every Fair Day to buy and sell their animals and their produce. Dunfanaghy would always be bustling with life as families lived on the main streets often above the shops and other businesses that they operated downstairs.

In the early twentieth century all these services were freely available in the area and the last Post Office had two postal deliveries every day. The Postmaster, Jim Nixon, was an agent for the Lloyds Telegraph which at that time ran a cable from Pollyguill in Hornhead to Tory Island, as part of its transatlantic communications network. Travelers to America could even purchase the tickets for their passage in the Post Office and were then faced with the choice of either traveling to Moville or Derry to get their boat or boarding the moving vessel from a small boat or Curragh as it passed Tory Island!

In the 1830’s Dunfanaghy had undergone a period of development which saw the Pier being reconstructed, the reclamation of the Market Square, and the construction of the block of buildings stretching from Ramsay’s Stores down to the Carrig Rua Hotel. The Market House which is the centerpiece of the town, was built as a Famine Relief project. Before this reclamation and the building of the Market House, Dunfanaghy would have looked a lot different to what we know it now with the tide flowing up to the buildings where Centra, Flynns and the Great Wall are now.

When the Griffiths Valuation of Tenements of 1858was taken inDunfanaghy, the area would have been recovering from the effects of the Great Famine and poverty would still have been a big problem in the area. At the time of the publishing of the Valuation, there were numbers of families living in the area of the town. The valuation began at the Stewart Arms Hotel which was owned by a Thomas McLean at that time, and made its way up that side of the street taking in Ramsays Stores and The Square before and going to the top of the town making its way down the other side of the street before finishing at the building which is now known as Arnolds Hotel. The residents of the town were mostly tenants who paid their rents to the following landlords Alex J.R. Stewart, Thomas McLean, Charles, Henry and Thomas Wilkinson, John Grier, James Irvine, Henry Moffett, and James and William Nixon.

There were some 68 different families living in this relatively small area and among the local landmarks still standing are the Market House and Ramsays Stores whilst the Presbyterian Church which was located in the centre of the town has gone ,its minister at the time of the evaluation was Rev. William Allman. This Church was just 10 years old at the time of the valuation having opened in 1848 after the Church and the other tenants of the Stewart Estatewere forced from their homes in Ballymore to make way for the Boundary Wall of the Stewart Estate which is still visible along the N56 to this day. The new Presbyterian Church was built in its present location at Kill and was opened in 1878. George Hogg from Hoggs Hotel is also listed as is Edmund Murphy who was the agent for the Ards Estate and he lived in what is now known as Arnolds Hotel.
The Griffith’s Valuation was a boundary and land valuation survey of Ireland completed in 1868 which was just after the Great Famine.Some of the names mentioned in the Griffiths Valuation are still familiar names in the Dunfanaghy area, although are not necessarily living on the Main Street such as the Ferry’s, Coll’s O’Donnell’s, McGinley’s, McClafferty’s Wilkinson’s, Algeo’s, Grier’s, Moffets, MacIntyres, Boyles, and Currans.

Other names such as the Divers, McCauslands, Ramsay’s, Heffermans, Nixons, Mahons and McNutts, are not as common in the area. Some of these families, such as the Ramsay’s and the Nixons, were business people in the town. The Mahons were farmers; some of the other names were probably members of the Crown forces who were stationed in the town at the time.
Richard John Griffith was a Scotsman who had spent two years in the early 1800’s valuing the land of Scotland before in 1825 being appointed to carry out a boundary survey in Ireland in preparation of the first Ordnance Survey. He completed this work in 1844. He was also appointed Commissioner of Valuation in 1827 and he completed his valuation of County Donegal in 1858. As the Census Records for Ireland were largely destroyed by fire in 1922, the Griffith’s Valuation serves as a very valuable tool for those looking up their family history