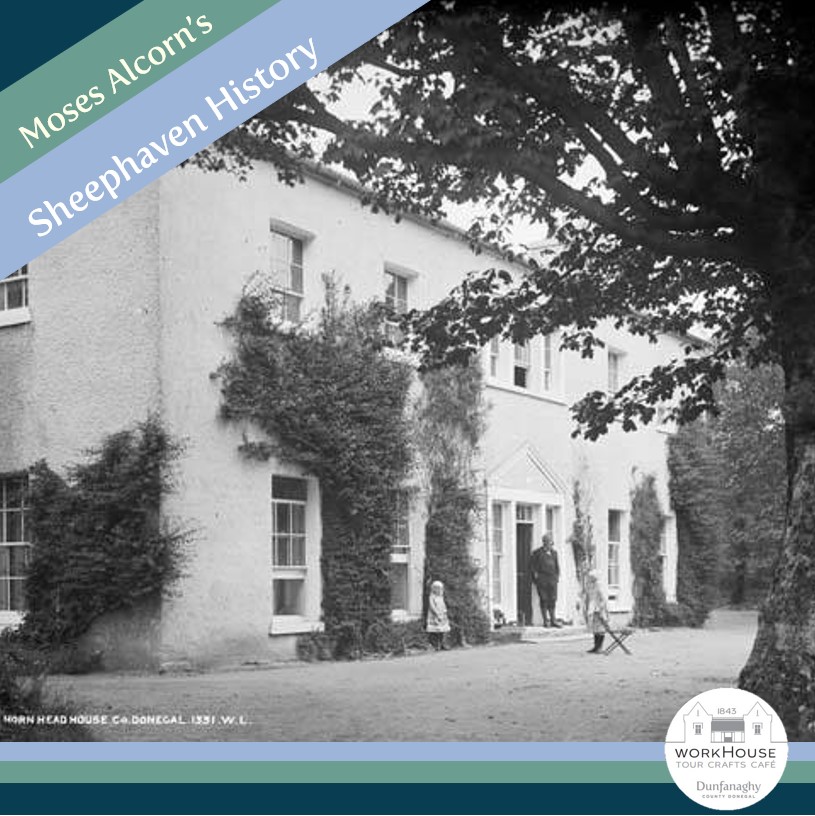 For those who travel the Wild Atlantic Way, one of the sites that they might see is an old imposing mansion nestled overlooking the Forestry on the way into Hornhead known locally as ‘Big House’. The façade of the building might be old and decaying now but for two centuries the old Hornhead House was the home of the powerful Stewart family of Hornhead who were the local landlords in the area.

Parts of the present Hornhead House was built by local O’Boyle Chieftain and dates from the 14th Century.  In the 1600’s, the area was granted to Captain John Forward and Captain William Sampson who sold the extensive Donegal Estate of Horn Head on the 4th February 1700 to Charles Stewart. He was the High Sheriff of Donegal in 1707.  He was originally an Officer in the Regiment of Foot commanded by William Stewart, 1st Viscount Mountjoy.   The Stewart family continued to reside at Horn Head until 1922 and the Estate was sold in 1934.

Charles Stewart was succeeded by his son Frederick Stewart, who died on the 7th April 1768.  One of his other son’s, Andrew, was killed following a fall from his horse.  His eldest Son Charles inherited the Horn Head Estate on the death of Frederick and both men were High Sheriffs of Donegal.  Charles Stewart built the Front Porch on Horn Head House and he also put the first tenants on Horn Head so perhaps some of us can trace our ancestor’s arrival in the area back to this time.  Capt. Stewart died in 1799 and was succeeded by his eldest son who was also the High Sheriff of Donegal.  He married four times during his lifetime and had 17 children.  It was during his lifetime that the improvements were made to the Horn Head Estate including the building of the Hornhead Bridge. He was succeeded by his eldest son the Rev. Charles Stewart. He was not succeeded by his eldest son William as he had died in 1864. He was a Captain in the 3rd Regt. Of Foot (The Buffs) and had seen action in the Crimean War and in China. His second son also died in 1844 and so he was succeeded by his 3rd son Charles Frederick, of whom’s daughter, Emily Anne, was married on the 6th October 1883 to Rev. John Brodie the first Rector of Dunfanaghy Parish Church (Holy Trinity) from 1773 until 1905.  It was during Charles Frederick’s time that the land around Horn Head House was cleared of all stones providing the good fertile land that is still evident today.  This stone was also used to build the stone ditches which can still be seen in the area till this day.  He was succeeded by his eldest son Charles Frederick Stewart who was the last of the Stewart Landlords to live in Horn Head House.  The last representative of the line was Lindsey Stewart.

The Stewart’s employed a large staff in the house and estate. They also owned the town of Falcarragh and during their time in Horn Head, the family had lived through many wars and revolutions at home and abroad including The Great War. They also lived through the Famine and Charles Frederick Stewart was on the Board of Guardians in the Dunfanaghy Workhouse during this time.

During the time of the Stewart landlordship, the area greatly changed.  There was no road access to Dunfanaghy from Horn Head and the only way out was to cross the strand which would have been dangerous as the strand that we see now was more of a Bay. They could also cross a small bridge near Errarooey called Trimnaburn part of which still survives.  In 1809, the Hornhead Bridge was built. When the storm of 1917 occurred it altered the scenery, not just of Horn Head House but of the entire peninsula. The Marram Grass, which had been growing on the Sand Dunes to protect them, was cut by the landlord and sent to the Front in France to provide bedding for horses.  Unfortunately, the sand dunes blew with the strong winds silting up the Sand bar in Dunfanaghy, preventing water from getting out and the New Lake was formed.  The Bridge was blocked and the fine surroundings of Horn Head House which was home to Tennis Courts, Terraced Drives, Orchards and a Canal was destroyed by the sands which left the area unrecognizable and from which it never really recovered.

After 1922, Stewart still returned to the area for holidays and still expected his tenants to save his turf for him.  The last person to live in the big house was Mrs. Short. Hornhead House and part of the farm was bought by local man Billy Durning who lived with his family in the Coach Mans House adjoining the property for many years, before its sale a number of years ago.  The rest of the Estate was divided up amongst the tenants.  Some of the land was planted out in trees by the Forestry Service.

Mrs Short, the last person to live in the house, had only one servant.  She was described as a strange woman. She always wore black and traveled around in the area in a Black Trap which was pulled by a black horse and the locals were a little afraid of her and it was said that she practiced “The Black Arts”. She had come from England and it was said that she had a hand in the death of her husband.  When she lived in another property in Horn Head, she used to white wash the brace of the wall above the fireplace but it was said that no matter how often she washed it, his face would always appear in it.

The Stewart’s were not the worst of the Landlords in this area. I remember interviewing Frances McElhinney from Horn Head around the time of her 100th birthday in 2001 and she has vivid memories of working in the House as a young girl and minding young Master Lindsey when he was a child. Another more recent story is one of the sons of Charles Stewart who left Hornhead in 1739 for the American colonies to work as a clergyman.  Interestingly, three years ago a descendant of this man who is still a clergyman in America visited the area with his granddaughter and was astonished to find that Horn Head House where his ancestor left from almost three centuries before was still standing..

The era of the English Landlord is long gone in Ireland but memories of this period can still be found in the memorials to the Stewart Family in Holy Trinity Church in Dunfanaghy and in their graves which can be seen inside the old Church of Clondehorkey at Kill.

Perhaps one of the more colourful aspects of the history of Hornhead House occurred just four years before the Stewarts bought the land and the house when in June 1696 the King of the Pirates, Henry Avery, sailed his ship full of stolen plunder into Dunfanaghy Bay after hot footing it across the Atlantic with the Navy on his tail. He engaged the occupants of Horn Head House in a short gun battle before he outwitted the local coastguard and made his escape again. Interestingly this was the last confirmed sighting of Avery and he was never seen again. This is just one story in the long history of Horn Head House.

Dunfanaghy may be best known today as a tourist destination but perhaps this might not always been the case as in the 1700’s a Clergyman in Killybegs warned his congregation against landing in the area and described the natives as being wild saying “that if the sea would not drown you, then the natives would kill you”. Thankfully, the welcome for the visitors is much more cordial in the area now!